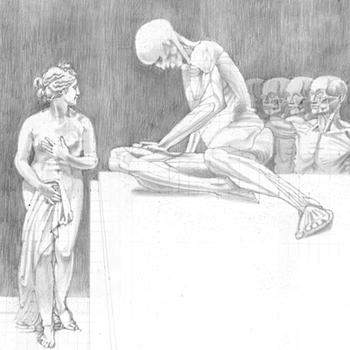 The drawing shows the artist's interest in the acquisition and revival of the sort of Classical, academic, figurative drawing-skills which were attained before the invention of photography and maintained throughout the nineteenth and early twentieth centuries. Traditionally, such skills were acquired through the drawing of plaster-casts and life drawing. "Night at Leeds Art Gallery 2 - "Smugglerius" Tells Canova's "Venus" the Plan for the Zombie Invasion of Leeds" includes the plaster-cast, known as "Smugglerius" which was on loan to Leeds Art Gallery in 2009. It is a cast of the flayed cadaver of a hanged criminal which, before being cast, had been forced into the posture of the Classical sculpture known as "The Dying Gladiator".
The cast is in the Edinburgh Cast Collection (a further cast is in the collection of the Royal Academy Schools, London) and was traditionally used by students for practising drawing and learning anatomy.
In drawing "Smugglerius", the artist is attempting to learn from and identify himself with this tradition. (Canova's "Venus" is in Leeds Art Gallery's permanent collection.)
The drawing's composition is governed by a concern for proportions. It is square. The horizontal line of the top of the plinth is exactly half-way up the drawing. "Smugglerius's" chest occurs half-way across it.
The distance by which "Smugglerius's" head juts into the drawing is related to the remainder of the width of the drawing, by the ratio known as the Golden Section.